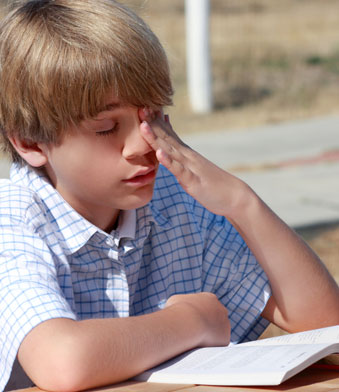 Peter was a young man of 7 years old when his parents first brought him to Hemispheres because of his ongoing difficulty with learning to spell and write. Peter was a quiet, shy young man who lacked confidence, relying on his parents to speak for him in clinic.

The neurological assessment revealed that Peter had mildly retained the reflexes in the hands and feet, but the area of greater immaturity was the retention of the Tonic Labyrinthine Reflex (TLR) and the Asymmerical Tonic Neck Reflex (ATNR).  Peter was unsteady, his balance when his eyes were closed was compromised and his awareness of where his body was in space was immature. Peter was not able to integrate and control the movements on either side of his body, his movements lacked symmetry and rhtyhm, but most noticeable was the hightened activity in the emotional reflexes, presenting with limited interaction, low confidence and teary emotional outbursts.

Peter attended a support school with an excellent support unit, he had one to one literacy support from a trained tutor and his parents were dedicated to helping him at home.

Peter started the movement programme in February 2010.  His initial months on the programme were dedicated to establishing automatic rhythmic movements of the cerebellum, whilst increasing sensory arousal to the hands and feet for writing and balance. Peter made steady progress, but there were considerable 'barriers' to the release of the TLR and the ATNR reflexes, and when movement was used to target these reflexes, Peter would become more emotional and find it difficult to cope.

After 12 months using movement and visual activities the ATNR remained, and a decision was made to stop movement therapy and concentrate on auditory stimulation. A SCAN 3 test of Auditory Processing was completed as a base line which demonstrated that Peter's linguistic processing was in the borderline to disordered range.  The Listening Programme (TLP) was perscribed with bone conduction. At this stage Peter stopped coming into clinic and was monitored at home whilst on the TLP.

The programme was delivered over 20 weeks and following a months rest the SCAN Test was repeated. This illustrated that Peter's linguistic processing was in the normal range for a child his age and neurological testing revealed that the ATNR had finally integrated.

More importantly, Peter is now improving in his tutoring sessions, his spelling has improved, his ability to retain learning has improved and his form teacher is observing a more confident, emotionally mature 8 year old young man in her class.